This and That: a display of recent acquisitions, loans and community photographs 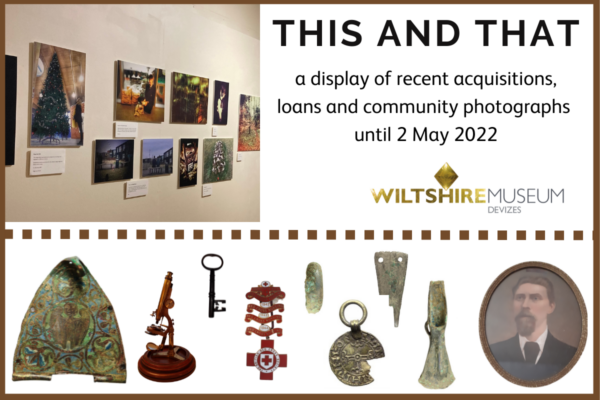 During the Covid-19 pandemic, we continued working with our communities and collecting objects that tell Wiltshire’s Stories. Some of these objects are displayed in our Oexmann Gallery until 3 May.

The project, begun before the pandemic, saw Students from Wellington Academy, Ludgershall, pairing with Wiltshire Museum and Salisbury Museum (part of the Wessex Museums Partnership) to create an inspiring photographic exhibition. The aims of the project were to support young people to engage in positive activities in a group environment, to take note of their surroundings, to create something for the community, to be physically active and to learn new skills. A professional photographer taught the students digital photography, including editing skills, and worked with the students to develop their exhibition. One student commented “you’re seeing the process behind it, it’s builds your confidence and you feel more confident in that… oh wow! I am proud of that, and actually I can do it!”. The project was generously funded by the Tidworth Area Board and the Police and Crime Commissioner Grant from the Wiltshire Community Foundation

Objects featured in the display include:

Highlight: a half lid of a medieval incense boat dating to c. AD 1250. Made in Limoges, France it is enamelled in green, blue and red, with traces of gilding.
It was dug up in the churchyard of St Nicholas, Bromham in 1897 and is only the second known example found in the UK.
Incense boats were sacred vessels to store frankincense and myrrh, which were both used in many church rituals, including Mass. The curved dragon-headed handle on the lid is for symbolic protection of the incense. In medieval times, the burning of incense was considered both an offering to God and an act of purification. A rare and important find.
This item is on loan to the Museum from the Parochial Church Council of Bromham, Chittoe and Sandy Lane.

Miss Niblett’s family farmed in Highworth, Ashton Keynes and Cerney Wick. Mary enlisted with the V.A.D in 1941 and nursed in many Military Hospitals and Casualty Clearing Stations across the UK, eventually ending her service in a British Military Hospital in Italy.

She was discharged from nursing duties in Taunton in 1946 and items in the collection include a demob kit bag; Mary’s uniform (skirt, jacket, and belt) with cloth badges; Defence and War medals and armbands; identity documents; movement orders; numerous Red Cross certificates. Mary’s time in Italy is also well documented with postcards and photographs. The collection was donated to the Museum.

• Three metal vessels created by artist Linda Brothwell, as part of the solo exhibition, ‘Conservations in Making’, Stonehenge Visitor Centre, 2019. Donated to the Museum.
• Portrait of Alfred James Underwood (1843-1884), who was the Chief Warder of Devizes Prison. The portrait may have been painted by one of the prisoners and is part of a collection of donated items.
• A Victorian child’s hoop, made by Fred Godden, a blacksmith from Coxhill Lane in Potterne, for his daughter, Elizabeth (bn 1888). Donated.
• A collection of items once belonging to Christopher L Rice (1907-1964, known as Jim) who was a police inspector in Devizes in the late 1950’s/early 1960s, including a Police medal for exemplary police service, a Police Athletic Association Championship Medal and a framed photograph of Jim, in his police uniform. Donated.
• Two sets of collectable Anstie cigarette cards – the WILTSHIRE DOWNS (1935) and STONEHENGE (1936). Purchased at auction (2020.8) (n.b Only one on display).
• Wiltshire Working Men’s Conservative Benefit Society sash (later known as the Wiltshire Friendly Society), founded in 1887 in Trowbridge. Victorian friendly societies were insurance clubs offering sickness and burial coverage and sociable activities in return for regular payments. Donated.
• Long stemmed clay pipe once belonging to Arthur Ernest Underwood of Potterne. Given to him at an event at the Corn Exchange/Bear Hotel, Devizes. Donated.
• 19th century metal key to the main gate of Roundway Psychiatric Hospital, Devizes – otherwise known as Wiltshire County Lunatic Asylum, which opened in 1851. The donor’s father, John Kennedy, was a hospital maintenance engineer, and he brought the key home after the hospital closed in 1995. Donated.

Natural History
Highlight: a 19th Century microscope, once belonging to William Cunnington III, a founding father of the Wiltshire Archaeological & Natural History Society in 1853 (which owns and operates Wiltshire Museum) and respected geologist.
The microscope was made by James Smith, London, c.1840 and donated to the Museum in 2019.

Numismatics (coins!)
• Hoard of seven Medieval silver cut halfpenny coins – six of Henry III and one of Alexander III – dating to AD 1253 – 1280. All the coins are in particularly good condition, suggesting the hoard was deposited not long after minting. Found in Brokenborough in 2015. A PAS Treasure find.
• Incomplete silver Anglo-Saxon penny of Edward the Confessor, modified into a pendant. The penny was struck by the moneyer Beorhtwine at the Wallingford mint and is dated to AD 1053-1056. Found in Collingbourne Kingston in 2017. A PAS Treasure Find, the reward was waived by the finder and landowner. The pendant was subsequently donated to the Museum in 2020.

PAS: The Portable Antiquities Scheme, is managed by the British Museum and records archaeological finds discovered by the public.

Entry to the exhibition is included in your admission ticket – book online.

Register for Exhibition: This and That: a display of recent acquisitions, loans and community photographs

Your ticket for the: This and That: a display of recent acquisitions, loans and community photographs

This and That: a display of recent acquisitions, loans and community photographs