In celebration of Local and Community History month, our volunteers are taking over our social media each Tuesday - talking about aspects of Wiltshire's amazing history. Today, it is over the volunteer Tabby for an archaeology debrief of All Cannings Cross!

"Today, for our takeover day we’re going to pick the top 5 artefacts from a Wiltshire archaeological site. This Tuesday’s site is *drum roll* All Cannings Cross! All Cannings Cross sits within a complex multi period landscape. In the early 1900s an early Iron Age settlement was found, which led to excavations in 1911 and 1920 by Maud Cunnington and her husband. Evidence shows the site was occupied between 800-500BC and shows some earlier use in the Bronze Age but none in the late Iron Age or Romano-British period. The museum’s collection has some intricate and often curious finds produced by those early excavations. 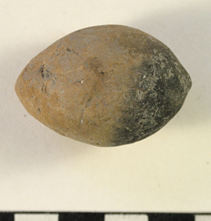 Find 1: And taking first place this week is this baked clay sling bullet from the early Iron Age. This is one of the hundreds that were found at the site. Slingshots or stones are numerous in many Iron Age sites including Ham Hill, Maiden Castle and Gussage All Saints. The use of slings is often tied closely to warfare. But they could have had several other uses like hunting, social purposes and celebration. 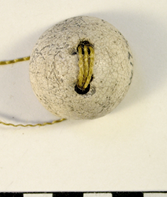 Find 2: here we have a sweet little bone button. It’s been created from the head of a femur or a humerus by being neatly cut off and then the surface polished with two holes bored through it. It was found within one of three pits all of which contained bone, flint and other artefacts. 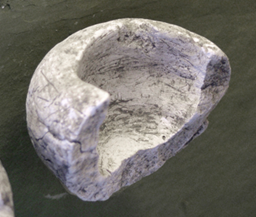 Find 3: find three is an earlier find from the Neolithic. It’s an incomplete chalk lamp made with a scooped out centre, and an incised chevron pattern around the rim. This one found at All Canning’s Cross is identical to 45 other carved ‘lamps’ found at Grimes Graves in Norfolk. However there are questions; are they really ‘lamps’ or something else more mysterious?

Find 4: here we have an early Bronze Age bead made of sapphire blue glass found during the 1911-12 excavations. According to research this specific bead may have originally come from the Alpine region. Often we are led to believe that prehistoric culture lacked any vibrancy or colour when in reality colour in clothing and adornment was incredibly important.

Find number 5: this photo shows a polished bone comb. It’s decorated with tiny zigzags, called chevrons, and has a hole at the top for suspension. However this find isn’t for combing hair! It’s actually for weaving and would have been used on an upright loom."

Your ticket for the: All Cannings Cross – Tuesday Takeover