To mark Census Day 2021 (21st March), our Marketing and Administration Officer has used information from previous census records to investigate who was living at 40 and 41 Long Street, Devizes, before they became part of the Museum.

The Census and the Museum

A census is a record, taken every ten years from 1801, recording details about the nation’s population.  The information collected included the names, ages and occupations of everyone staying overnight in all properties on a designated night.  The individual records are sealed for 100 years from the date of the census, but then become publicly.  They provide a wealth of information, and with the advances in technology, it is now very easy from the comfort of your home to search them for details about properties, individuals and industries on a family, local or national scale.

The Wiltshire Archaeological and Natural History Society was formed in 1853 and set up a permanent museum (Wiltshire Museum) in Long Street, Devizes in 1879.   The Gothic entrance to the Museum was erected in the 1870’s between two Georgian houses – which the Museum expanded into in 1902 (no 40) and 1945 (no. 41).

Using the census records we can find out a lot about the occupants of the premises both before and after being acquired by the Society.  Using other publicly available records even more can be found out about the individuals.

1851 – it is possible from this census to find out the relationships in the household – the ‘head of the household’ is recorded as Susanna Beames, age 67 from Chippenham and unmarried.  She is living in the property with unmarred nieces (Mary and Margaret) and nephew (John, a. 40) and of course a young, female, servant 19 year old Marianne Maxham – a prerequisite in any quality Victorian household.  Susannia is also the householder in 1861.

In 1871 the householder was the Mary Beames, with her sister Margaret, both of independent means.  There aunt having died in 1868.

After decades of occupations by the Beames by 1881 the property was occupied by Henry Hussey (a veterinary surgeon), his wife Sarah, an assistant and a servant.

In 1891 the property was now a girl’s school, run by Elizabeth Farmer from Bath. 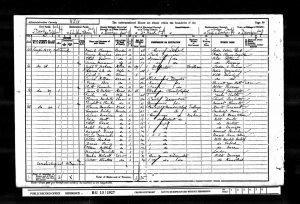 The 1901 Census records that Miss Florence Barnham and Miss Georgina Kirby were now the proprietors of a school at no. 40 [shown in RHS image]. The census also records one governess, one student governess, 8 female pupils between the ages of 9 and 15, and two general domestic servants age 14 and 19.  A total of 14 young women in one property.  It would be interesting to know where they all worked, slept, cooked and ate!

In 1902 this property was acquired by WANHS to allow the Museum to expand, with rooms for a live-in caretaker.

The 1911 census records that the family occupying was Charles Willis and his wife Annie.  Charles is listed as a general labourer, but of more interest to us, Annie is recorded as ‘caretaker of a museum’.

In the census records we are able to see the occupiers of no. 41 during the Victorian period, interestingly the property was being used as a boarding school for much of this time... 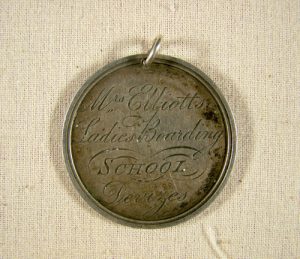 1841 – Richard Elliott, his wife Frances and daughters Eliza, Mary, Jane and Charlotte who are all recorded as teachers.
Richard Elliott was an independent minister in Devizes and baptism records show that he and Frances (known as Fanny) baptised 11 children at the Independent Chapel in Devizes.

There was a further teacher, two servants and 33 (!) female pupils ranging in age from 4 to 19.
No 41 is the larger of the two houses the Museum occupies, but we still don’t know where they all slept, let alone, cooked, eat, studied …..  and a lot of work for the two servants.

In our collection we have the following medal (DZSWS:2007.105) 1 silver school prize medal inscribed on the obverse; 'MRS ELLIOTT'S LADIES BOARDING SCHOOL DEVIZES' and on the reverse; 'A REWARD OF MERIT FROM MR BURGESS, TEACHER OF DANCING TO MISS CLARK 12TH JUNE 1822'. It has a ring for suspension.

1851 – Richard Elliott and family.  Frances and daughters Eliza and Charlotte are recorded as governesses.  Richard himself is a dissenting minister from London and his wife from Newport Pagnell.  Recorded as residing in the room on the night were Richard, his wife, two daughters, two grand-daughters, one visitor, two servants and 12 pupils – all girls.  So 21 people - far fewer than 10 years previous - perhaps suggesting the school had ‘down-sized’ or living conditions improved since 1841.

By 1871 the house must’ve been much quieter as the occupants were James Baron and his wife Mary, their son Roger, Louisa Flood a 19 year old nurse from Bath and 20 year old Elizabeth Dreese.  James was a ‘Clergyman without care of souls, master of grammar school’.  From Hulme in Manchester.

In 1881 the property is listed as unoccupied.  It could just be that it was empty on the night of the census.

In 1891 the property was occupied by George Swithen Adee Waylen and his son George Henry Hitchcock. George senior was a General Medical Practitioner.

1911 59 year oldGeorge is now a widower, living with his son 28 year old George and 3 servants.  Both George’s are recorded as physicians and surgeons.

Property purchased in 1945 by WANHS, and the upper floors occupied by assistant curators and their families.

Today the property is mostly devoted to display space, with the Victorian School Room used as our Lecture Hall, still educating children of all ages. A fitting full circle!

Your ticket for the: Census Day is here!