Heading north to visit Neolithic sites  We missed the train that we were supposed to catch (the Tokyo rush hour is something else) which in turn meant that we missed the intended meeting with representatives at the Akita Prefecture Centre for Protection of Cultural Property.

We were catching our first bullet train, made up of 17 carriages. It terminated at Tokyo station and was prepared for the return journey in less than 10 minutes. This included turning round all the banks of seats so that they faced the direction of travel. The journey took 3 hours through the pouring rain. Although this was no typhoon, the rain was exceptional and we later learnt that 8 people had died in flooding. The first hour was solidly built up before giving way to paddy fields on the coastal plan, before turning inland to Marioka. The train divided and slowed as it climbed through the hills, with gorges, bridges and tunnels. Steep gorges with bushes were just like scenes from Japanese paintings.

We met up with the ret of the group at Tamagawa Station, which was also a tourist information centre and museum. The Museum featured a large range of Jomon pottery and other artefacts, mainly dating from the middle Jomon period. The exhibition was carefully thought through and well laid-out, with illustrations explaining how the pottery was made and about how people lived. Alongside was a Museum about a locally filmed detective series, featuring props including futuristic smart goggles and revolvers. The town outside seemed rather different, with few people or cars, let alone car chases. The town is a summer resort and winter sports venue, in the autumn it was very quiet.

We met the remaining members of the group and drove to Tamagawa Hot Springs Hotel in the mountains. As we climbed into the hills, there were more trees and there were vibrant colours of autumn leaves. Darkness falls at about 4.30 and were arrived at the hotel in the dark and wet. The first priority was to have a traditional Japanese bath – first changing into a yataka bath robe. The water came from a hot spring and is the most acidic in Japan. The water also featured health-giving radium with a low dose of therapeutic radiation. Men and women bathe separately, without costumes. There were a variety of plunge baths at different temperatures and an outside bath, where you could wallow while watching the stars. After an hour of relaxation, it was time for a buffet dinner, with a huge range of choices. Most impressive was the beer pouring machine, which tilted the glass as it poured to ensure that the head was just right. 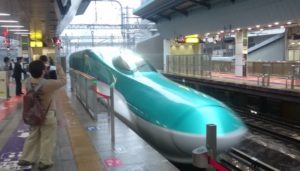 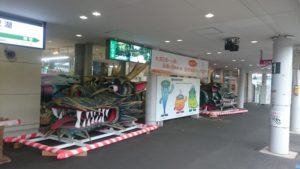 Tamagawa Station - dragons carried in procession in the town 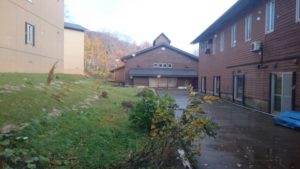 Your ticket for the: Jomon Japan partnership visit – day 2 Tamagawa