The day started with bright sun and the colours of the autumn leaves were stunning. A morning bath was essential, though it meant that I had to miss breakfast as the queue was too long. Instead, I bought an apple from the hotel shop - apples are a local speciality – the variety is huge, with a juicy, crunchy texture.

We headed to Oyu stone circles back through the spectacular scenery that we had missed in the dark. We were met at the visitor centre with much bowing and exchanging of business cards, before heading off to the southern circle. Jomon stone circles are very different to those in the UK. They are formed of groups of stone settings, with the stones generally about a foot long. It appears that the circles began as small circular settings over a small number of individual graves, before being linked into a wider circle. Some of the circular settings have a central upright stone with four stones marking the points of the compass, infilled in by stones set radially. One of these setting marked the centre, and one was off-centre, with the remainder forming the centre. Only a few of the setting have been excavated, but they seem to mark burials - the volcanic soil is too acidic for human or animal bone to survive, so it is difficult to identify graves. We were fortunate in being able to pass the barriers and to head into the circle itself.

We then moved to the northern circle, crossing the road that bisects the site. The pattern is very similar, but the circle is larger, and there are also some larger stones, up to 1.2 metres in length. The stone are dolerite and andesite, taken from the nearby river, up to 7km upstream. At this circle, a large number of postholes were excavated, marking buildings that encircled the stone circle. These have been reconstructed, using the original postholes, as thatched buildings. The implication is that these building were used to expose the bodies of the dead, before the remaining bones were gathered for burial in graves or within a finely decorated pottery vessel. Also found are broken pottery representations of human figures, wearing elaborate masks. These small figures, known as ‘dogu’, were intentionally broken. Some fragments were buried in grave pits, others scattered and some have not survived, and it appears likely that they were retained by family members.

The stone circles were not isolated, nearby were a number of houses, large circular shallow pits, with structural timbers, as well as evidence for hunting and food storage. The site is set on a plateau, close to a river, on a tongue of land, with views across the river flood plain. There are possible alignments of the stone settings and linear features with the rising and setting of the sun as the mid-summer and mid-winter solstices.

The Oyu visitor centre is impressive, with a circular open courtyard leading to the entrance. At the centre is a reconstruction of one of the stone settings, so that visitors can see the setting in detail, with a better view than from behind the rope barrier. There is an extensive display of Jomon pottery, dogu and other finds, with extensive interpretation. The site is managed by the Board of Education, which was evident in the way that there were examples of children’s work. There is a large, well equipped workshop for pottery-making and a lecture theatre, The reception are doubled as a reference library with all the reports about the history of the site. The only surprising gap was the lack of a shop and the refreshment facilities were a drinks machine (ubiquitous in Japan).

We then moved on to Isedotai stone circle. The site was found in advance of the construction of a dual carriageway to the regional airport. The site is again on a level plateau, overlooking a river and with spectacular views. Here there are four circles, made of stones about 30cm in length, again the circle is formed by a number of settings arranged in a circle. The circles were surrounded by 4 post structures and there were many pits that probably held burials, including some with complete Jomon pots. Human and animal bone does not survive in the acidic volcanic soil. Again, there were many ‘dogu’ – nearly all broken and the pieces scattered.

The site is entered from the visitor centre - a well-designed site museum with interpretation aimed at different audiences. The range of artefacts includes jade pendants, open bowls with ‘cloud’ decoration and pots with haematite paint / slip. The interpretation was also translated into English and included the word ‘deference’, which a useful way of understanding how Japan works, along with the words ‘reverence’ and ‘respect’.

There is a well laid-out path leading to the site, passing the concrete bridge pier that had been constructed before the decision was taken to re-route the road. This now is the ‘stage’ for an annual Jomon festival in September. The path leads across the river that still teams with salmon (though we are too late in the season to see any) before winding through the woods, passing the earthworks of a medieval war-lord’s castle. The site is quite fragile and great efforts are being made to ensure the preservation of the site – it is covered to protect it from the winter snow and each of the 4,000 stones is carefully monitored. The buildings around stone circle ‘A’ are suggested by newly installed fibre-glass replica timbers – set on top of a 40cm deep layer of soil as a buffer from the underlying archaeology.

The visitor centre included a small shop area, with locally made Jomon-inspired items – including small towels (equivalent of tea-towels) and small crochet models of Jomon pottery and dogu. We were honoured to meet the archaeologist who had discovered the site and was responsible for setting up the visitor centre. We also heard how a section of the re-routed road was to be replaced by a tunnel to protect the setting of the site.

Once the EH team had finished discussing possible exhibition loans, we drove to Kitaakita and the Pokapoka Hotel. This was a traditional Japanese hotel, with mats on the floor and a futon to sleep on. We caught the end of the England / New Zealand rugby match – a satisfying victory for England. 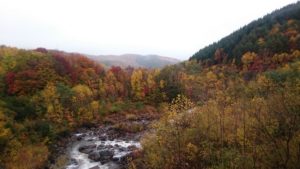 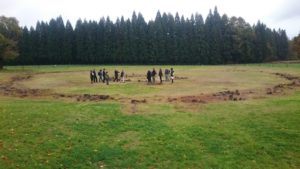 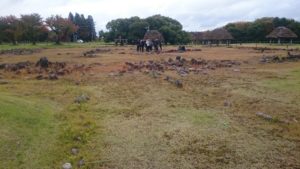 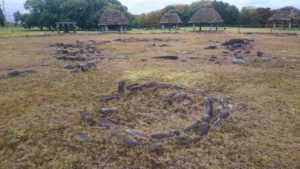 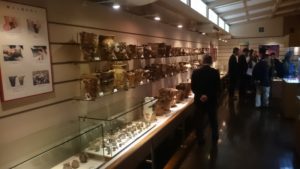 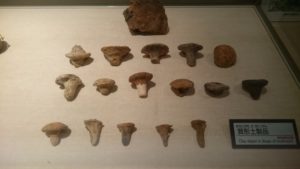 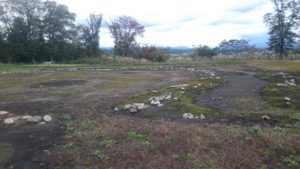 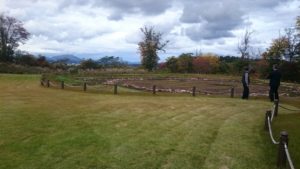 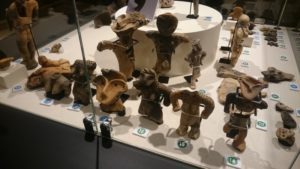 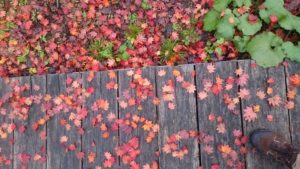 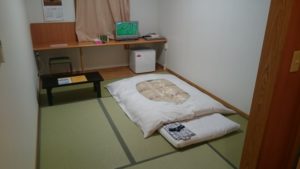 Hotel room with the England vs New Zealand rugby on TV

Your ticket for the: Jomon Japan day 3 Oyu and Isedotai stone circles