On loan from GCHQ is the decrypted telegram which finally pushed America into the First World War. It is included in an exhibition of US wartime propaganda posters at Wiltshire Museum in Devizes. 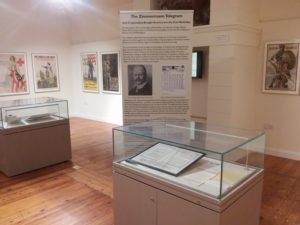 Copies of selected documents from the Zimmermann Telegram files are on loan from GCHQ. Arthur Zimmermann was the German Foreign Minister who, in 1917, telegraphed German embassies in Mexico City and Washington. He stated German plans for unrestricted submarine warfare against any merchant ships carrying cargoes to Germany’s enemies; without regard to nationality and without warning.

This risked the sinking of American ships, thereby bringing the still neutral United States into the war on the side of the Allies. To off-set this, Zimmerman asked his Ambassador in Mexico to propose an attack on America’s southern border; promising Mexico the prize of re-conquering Texas, New Mexico and Arizona, ceded to the US almost seventy years earlier!

Unknown to the German Foreign Ministry, their telegrams were being intercepted by British naval intelligence, deciphered, and America alerted. The course of the war turned in the Allies favour.

“Publication of the Zimmerman Telegram was an essential element in persuading neutral America that the two sides, in what was still largely a European War, weren’t just as bad as each other. It showed that the Germans had no hesitation in proposing to dismember the United States. Brilliant work by British codebreakers revealed the German plan, and the skilful way in which their leader, Admiral ‘Blinker’ Hall, managed to publicise the information without revealing British codebreaking successes. This was instrumental in creating the climate that meant that the US would enter the First World War on the allied side. I am really pleased that we have been able to support Wiltshire Museum in staging this exhibition.” 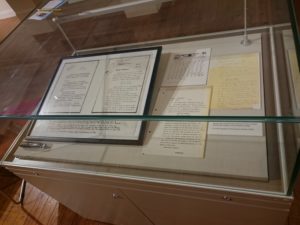 “We are privileged to have copies of this historic telegram at the heart of our ‘Winds and Words of War’ exhibition, and grateful to GCHQ for lending them. This touring exhibition of 40 stunning vintage propaganda posters is curated by the San Antonio Public Library Collection, Texas, who rediscovered these important lithographs in 2006. We are proud to be the only UK venue on the European Tour.”

The Winds and Words of War: WW1 Posters and Prints from the San Antonio Public Library Collection opened on 18 November 2017 runs until 22 April 2018.

Find our more about the history of GCHQ from the GCHQ Archive.

Text of the Telegram

“We intend to begin on the first of February unrestricted submarine warfare. We shall endeavor in spite of this to keep the United States of America neutral. In the event of this not succeeding, we make Mexico a proposal of alliance on the following basis: make war together, make peace together, generous financial support and an understanding on our part that Mexico is to reconquer the lost territory in Texas, New Mexico, and Arizona. The settlement in detail is left to you. You will inform the President of the above most secretly as soon as the outbreak of war with the United States of America is certain and add the suggestion that he should, on his own initiative, invite Japan to immediate adherence and at the same time mediate between Japan and ourselves. Please call the President’s attention to the fact that the ruthless employment of our submarines now offers the prospect of compelling England in a few months to make peace.
Signed, ZIMMERMANN”

How Cryptanalysis Brought America into the First World War

On 16th January 1917, at the height of World War I, the German Foreign Minister Arthur Zimmermann sent an enciphered, secret telegram to the German Embassies in Mexico City and Washington.

This telegram stated that Germany planned to begin, on 1st February, unrestricted submarine warfare against any merchant ships carrying cargoes to Germany’s enemies Britain and France, without regard to nationality and without warning.

The main drawback of this strategy was the danger of inadvertently sinking American ships, thereby bringing the still neutral United States into the war on the Allied side. Therefore, in order to distract the US and prevent it sending troops to Europe, Zimmermann’s telegram asked his Ambassador in Mexico to propose an alliance with Germany and an attack on America’s southern border. The prize he offered Mexico was no less than the re-conquest of Texas, New Mexico and Arizona, which had been ceded to the USA almost seventy years earlier!

Unknown to the German Foreign Ministry, all its telegrams were being intercepted and deciphered by the British.  This effort was made by naval intelligence, housed in Room 40 of the Old Admiralty Building, known as ‘Room 40 OB’.  The effective head, Captain (later Admiral) Hall immediately recognised what political dynamite the telegram would represent in America.   He and the Foreign Secretary, Arthur Balfour, decided to give the telegram to the US Government, on condition that the source was protected. Room 40 OB could not afford to have the Germans learn of its success because it was also reading all German naval messages.

German submarine warfare began on 1st February and the United States broke off diplomatic relations with Germany within a few days. On 1st March the telegram was published without mention of either the British or decipherment, giving American newspapers the impression that US agents had extracted it from German diplomatic premises.  Zimmermann admitted his involvement on 4th March thereby removing any doubts about the telegram’s authenticity.

A storm of outrage in the United States swept away all remaining neutralist and pro-German public opinion, and on 6th April the US Senate unanimously approved President Wilson’s declaration of war.  With the economic power of the US against her, Germany’s defeat had become inevitable.

On route from Germany’s Foreign Ministry in Berlin to its embassy in Washington, the Zimmermann Telegram passed through London where a copy was taken for Room 40.  It was encrypted in a newly introduced code book named 7500, the British knowledge of which was incomplete.  On receipt of the Zimmermann Telegram in Washington the German Ambassador, Count Johann Heinrich von Bernstorff, was instructed to forward the telegram to Germany’s Minister, Heinrich von Eckardt, in Mexico City.  The embassy in Mexico did not hold a copy of the 7500 code so Bernstorff encrypted the telegram using an older code named 13040 that they did hold a copy of.  Room 40 had cryptanalytically recovered the 13040 code and understood it well so they were able to recover the complete text.  Top right is written the date ‘Feb.19.17’ as it was Room 40 practice to put the date of decryption on its decrypts.

Your ticket for the: On loan from GCHQ – key moment in history on display at Wiltshire Museum