This month is Local and Community History month. To celebrate the rich history of Wiltshire, our volunteer, Bethany, has put together a piece on a few of her favourite historical sites across the county... 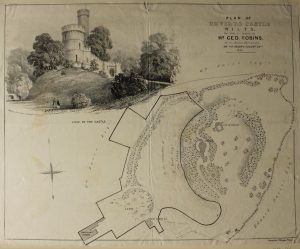 Devizes Castle has been in existence from around the 1080s, featuring in the Doomsday Book of 1086. Since then, there have been multiple occasions where the castle has been rebuilt - the most recent being in the mid-1800s. Devizes Castle had belonged to the crown up until the 17th Century, it had even been gifted to Catherine of Aragon by Henry VIII! However, after their divorce Henry reclaimed the castle as his own.

Lithograph prints (also known as litho prints) are pictures printed by using a stone or metal block which has an image drawn on using a substance that attracts ink. It is a process that was invented in the late 18th Century Bavaria and is still practiced to this day. 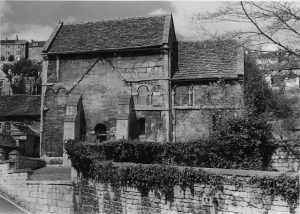 St Laurence’s Church in Bradford on Avon is a rare example of a well-preserved church building that existed prior to the Norman Conquest of 1066. It is one of few surviving Anglo-Saxon Churches within England that does not show evidence of medieval alteration or rebuilding. The church shows consistency with other Anglo-Saxon buildings, namely being tall and narrow with small windows.

There is much dispute over the exact period the church was founded - there are some claims that the church was founded in 700 AD, while other sources claim that the church belongs more within the late 10th century or the early 11th century. It is believed that Æthelred II (also known as Æthelred the Unready) gifted the church (and Bradford on Avon) to the nuns of Shaftesbury in 1001 as a refuge from Viking attacks as as a resting place for the remains of his late half-brother King Edward the Martyr. The idea that St Laurence’s Church held the remains of a former King of England could explain the elaborate decoration of the building.

In 1952, the church was designated as Grade I listed - which means that it is of exceptional historical interest. Over time, the church has been used as a ossuary (a building used to store human remains) and during the 1800s, it was used as a free school for boys.

Visit Bradford on Avon Museum to find out more about the local history: www.bradfordonavonmuseum.co.uk/ 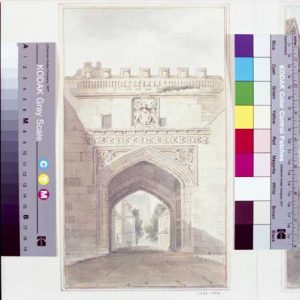 John Buckler (1770-1851) was an artist and architect, best known for his paintings of churches and buildings of historical interest. Every year between 1798-1849, his paintings were exhibited at the Royal Academy. In 1810, Buckler became a Fellow of the Society of Antiquaries of London. By the end of his life, he claimed to have produced over 13,000 drawings of buildings! While his work featured buildings from across the country, some of Buckler’s work focused on different cathedrals and architectural structures within Wiltshire.

This was because, shortly after 1800, John Buckler was commissioned by Sir Richard Colt Hoare (of Stourhead, he was an antiquarian and archeologist) to produce ten volumes of drawings and churches and historic buildings from within Wiltshire. These volumes were published between 1822 and 1844, as “The History of Modern Wiltshire 1822-1844”.

This particular piece features the North Gate of Cathedral Close in Salisbury (which is now known as the High Street Gate and is the main point of entry to Cathedral Close). The North Gate was built between 1327 and 1342 and housed a small jail for those convicted of crimes within the Close.

Visit The Salisbury Museum to find out more about the local history: www.salisburymuseum.org.uk 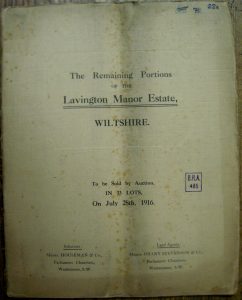 DZSWS:SC.32.11 - Sale catalogue,1916, for the sale of the Remaining Portions of the Lavington Manor Estate (including The Manor House), in the parishes of Market Lavington, Littleton Panell [West Lavington] and Little Cheverell, Wiltshire

On 28th July 1916, after the death of Charles Awdry (in 1912), the 33 remaining lots from the Lavington Manor Estate were sold off via auction. Some of the lots included in the auction were: the manor house itself, Bouverie Lodge (the gatehouse to the manor) and the cricket pavilion (now where the houses of Pavilion Gardens stand) and cricket field (part of which is now occupied by Lavington School). 10 years after the auction had taken place, the manor house was brought by Dauntsey’s School - where it has since been used as a boarding house. 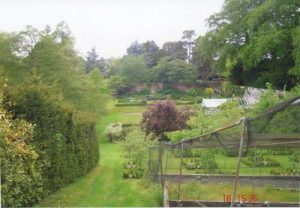 Visit Market Lavington Museum to find out more about the local history: https://marketlavingtonmuseum.wordpress.com/

Your ticket for the: Local and Community History Month