To celebrate the birthday of Queen Victoria,  our volunteer, Amy, has been researching objects in our collection linked to the monarch... 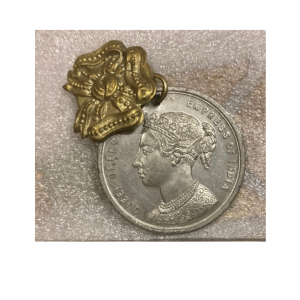 A medal brought to Wiltshire from Liverpool...

Queen Victoria, having travelled from Windsor, arrived in Liverpool on Tuesday 11th May 1886, to open the Liverpool International Exhibition of Navigation, Travelling, Commerce and Manufactures. The fair was held in Antwerp's exhibition hall which was transported for the exhibition alongside Wavertree Botanic Gardens. Additional attractions gave more people the chance to visit the SS Great Eastern. To commemorate the event there were medals given out to the attendees, as shown in the image.

Celebrations in Devizes - A medal and poster 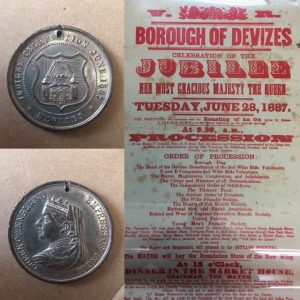 A Devizes medal celebrating Queen Victoria's Jubilee in 1887.
Additionally in the Museum's Library, a poster advertising the town's celebration on the Jubilee, taking place on Tuesday 28th June. All were invited to join for the roasting of an ox on the Green, followed by a procession. 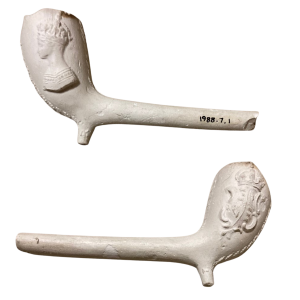 During the Victorian era, clay pipes were given a much more intricate design look, with increasingly fancier pipes being introduced to the public. Several pipes had engravings of leaders, such as Queen Victoria- as shown in the image, and they incorporated shapes of animals, fruit or fish into the design. These details were able to be added to the pipe due to the increasing of the bowl size, allowing more tobacco to be added. Clay pipes were popular as it provided "pure" smoke that wasn't changed by the flavours of the bowl. 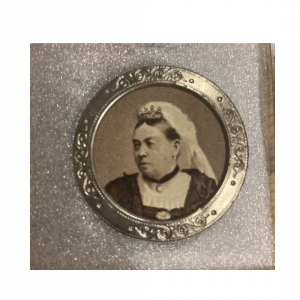 Commemorating Queen Victoria's death on January 22nd 1901, several of these brooches were created in honour of her. Encased in a soft metal, most likely sheets of silver, the brooch shows how much the England population liked her as brooches with photographs were designed as tokens of affection, often having motifs and messages engraved in their surface.

By Amy Ellis, Museum Volunteer, May 2021

Your ticket for the: Queen Victoria’s Birthday