Remembering all those who have fought and those who lost their lives during conflict. 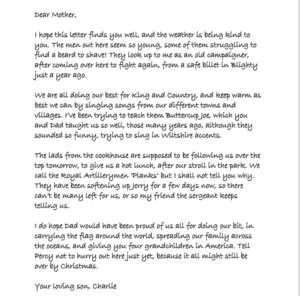 During 2018, we embarked upon a 'Letters Home project'. Volunteers, local and far away, wrote letters home inspired by factual information about soldiers from Devizes who fought in the Great War and are commemorated on the Devizes and Roundway War Memorial.

The inspiration for the stories came from the information in Richard Broadhead’s Book The Great War – Devizes and District Soldiers.

This project ran alongside our an exhibition at the Museum - Wiltshire Remembers: The Aftermath of the First World War.

Read more about the exhibition here.

Volunteer Bethany has also explored some of the objects relating to War in our collection. 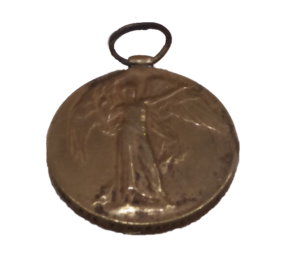 This Victory Medal was on loan from Mr M Mence and featured in a 2014 exhibition. It is marked D7869 PTE. W R BARRETT AOC.

The Museum also has three medals awarded to H. Robbins for his service in the First World War. 1914-15 Star; War Medal and Victory Medal. It is thought that this may be connected to Herbert John Robbins (Service Number: 18827), who fought in the Wiltshire Regiment.

The 1914-1915 Medal was distributed by the British Empire to soldiers who served in any capacity between 5th August 1914 – 31st December 1915.  It was never usually awarded on its own, rather it was often paired with the British War Medal and/or the Victory Medal.

The British War Medal was issued to all officers and servicemen in both Britain and the Empire who served (originally) between 5th August 1914 – 11th November 1918 - later extended to include 1919 and 1920 to acknowledge those who took part in mine-clearing and further operations.

The final medal in this collection is the Victory Medal. It was often awarded alongside either the 1914 Medal, the 1914-1915 Medal and the British War Medal. Those eligible for the award were: those who fought in the war in any capacity between midnight 4th/5th August 1914 – midnight 11th/12th November 1918, women who served in Women’s Royal Navy, Women’s Army Auxiliary or the Women’s Air Force, canteen staff and even members of charitable services. 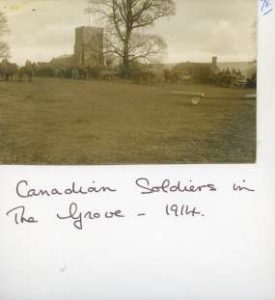 There were many towns in Wiltshire that hosted Commonwealth soldiers during the First World War in order to train before being sent to the battlefield. Two examples being Bulford Camp, which hosted Australian and New Zealand soldiers (which brought about the Bulford Kiwi in 1919 - a large chalk carving of a kiwi dug by New Zealander soldiers on Beacon Hill, above the town) and Market Lavington, which was home to Canadian forces – the subject of this photograph.

The Grove has since been partially built upon, with the Grove Farm Estate being built in the 1980s. In the background of the photo, St Mary’s Church can be spotted alongside what appears to be a thatched farmhouse – which is now near the location of the community hall. Many of the soldiers are seen on horseback, with some horses pulling carts.

The Canadian soldiers left a large impact on Market Lavington, some of which can still be seen today. In terms of names: a small area of the town became known as ‘Canada’, a road has been named after Canada (‘Canada Rise’) and there is even a small area of woodland known as ‘Canada Woods’. There have also been instances of women from Market Lavington and neighbouring areas marrying the Canadian Soldiers - one individual being Mary Redstone (from Easterton), who married Edward Bliss Taylor in 1919 – the two had a local wedding, but decided to reside in Canada. 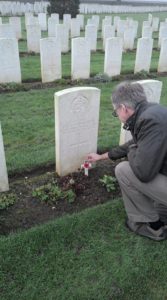 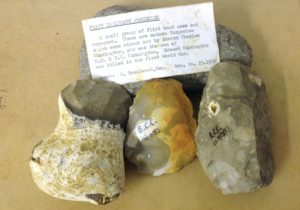 Your ticket for the: Remembrance Day