Volunteer Anna has been undertaking research into the Seend Iron Works and links to our collections... 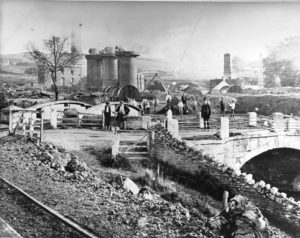 The Seend Iron Works began when J.E. Holloway gained mining rights on a small area of land in Seend, located just below the Bell Inn. J.E. Holloway was the first person to extract iron ore commercially, in 1854, using his knowledge to his advantage, so much so that in 1856 he extracted 10,000 tons of the ore. The Canal in Seend meant that he could transport the load to Bristol to then be shipped to South Wales, where the Tredegar Iron Company extracted the pure iron from the ore. This quickly led to success for the area, causing investors to gain interest in the area, largely Messrs including William Sarl.

In 1856 Sarl managed to lease three areas of land that were heavy with iron and built a tramway to the local railway station, making it easier to transport to South Wales. Unlike J.E. Holloway, Sarl wanted to smelt the iron ore on site and so as a result set up the ‘Great Western Iron Ore, Smelting, and Coal Company’ in 1857. However, fairly quickly people began to speculate that there was fraud over the mining and mineral rights in Seend, in addition to failing to complete the build of the first furnace in time. This led to the bankruptcy, but Sarl soon took back the area in 1860. By January 1860, the first furnace was completed and smelting iron ore began. 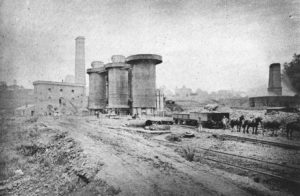 There were three main blast furnaces, each around fifty feet high, and employed over 300 people. The first furnace was likely erected by Samuel Blackwell, but Sarl did not find enough fuel to begin running it continually. To manage this, he bought a supply of coal from the Old Grove colliery, helping him to raise profits and expand the business.

Because of the success of the Seend Ironworks, the Wiltshire Iron Company was founded (June 1861) with the initial idea aiming to increase business capital further. This led to increased employment for the locals, as well as bringing in men from other areas, mainly Ireland and South Wales as seen by the 1861 Census.  Unfortunately for these workers, the aim of raising further profits for the area soon failed, with the Wiltshire Iron Company closing in 1864.

The next firm that tried to use the Seend Iron Works was from Glasgow, William Malcolm and Samuel Smyth Malcolm, both of whom took over the works in 1870. They produced over 300 tons of pure iron a week and employed over 300 men. Unlike many of the previous firms, the Malcolms failed to continue with the Seend Iron Works in 1873 due to complications with another firm.

Richard Berridge was a partner of the firm, Sir Henry Meux, and operated the works between 1873 and 1888. His first manager, Mr Osborne Aldis, invented a way to show the presence of inflammable cases in coal mines, but was soon succeeded by Oliver Kimber in 1875, who was described in the 1871 Census as a ‘pupil and assistant’.
This firm was certainly the most successful in operating the works, however, in 1876 there seemed to be no mention of the selling of pure iron. 10 years later, the Ordnance Survey map showed the Seend Iron Works as being ‘disused’. In 1890, demolition began and the land was to be sold off to none other than Oliver Kimber.

The images are dated in 1890, suggesting that they were taken earlier in the year, before the demolition began. They all show the Iron Works in action, with horses dragging carts full of iron ore to the furnaces, and pure iron to the Canals and railway stations where they could be transported.

Research and writing by Anna Hallett

Your ticket for the: Seend Iron Works – research by volunteer Anna