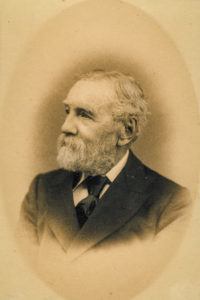 Photograph of William Cunnington III in 1885

William Cunnington III was the driving force behind the founding of the Wiltshire Archaeological and Natural History Society in 1853. He was the grandson of William Cunnington I, the Heytesbury wool merchant who excavated the Bronze Age burial mounds on Salisbury Plain with Sir Richard Colt Hoare in the early years of the nineteenth century. His parents were Elisabeth, daughter of William Cunnington I and her cousin-husband, William Cunnington II, also a wool merchant. The family moved to Devizes in about1830 and William III started a wine business in 1836, buying property and leasing vaults on the corner of Wine Street. He lived at different times in St. John’s Street; Hillworth House and finally in St John’s Court. William left Devizes in 1874 to live in London, where he took over a paper manufacturing business.

The Society owes its existence to the energy and foresight of William Cunnington III. When his friend John Britton wrote to him in 1852 offering to sell his collection of Wiltshire books, manuscripts and pictures to, ‘some gentleman of the county or public society’, he quickly realised the importance of acquiring this collection. Writing to the gentlemen about to assemble for the Quarter Sessions in Devizes, he formed a committee and raised the necessary £150 to buy the collection. A meeting was then called at Devizes Town Hall on October 1853 to establish a society to care for these treasures. John Britton described William’s response as, ‘in the true spirit and zeal of his revered and amicable grandfather’.

William Cunnington III had by then become a geologist of note, collecting fossils from the age of seven, a hobby made possible by the extensive construction of railways and road cuttings during the early Victorian period. The Reverend Prebedary Wilkinson said of him in 1878, ‘no geologist knew more of the strata of the earth in the west of England than did Mr Cunnington’. He contributed a large number of exhibits to the temporary museums set up during the Society’s Annual General Meetings, held at different venues in the county, at which he frequently read papers. He contributed twenty-seven papers to the Society’s journal on the subjects of barrows, Stonehenge and the Stourhead Collection of Bronze Age grave goods, which he had been instrumental in acquiring for the Society and which he catalogued at the age of eighty-two. A generous donor of books, manuscripts, election handbills, engravings and artefacts, in 1895 he gave the Society the Samuel Woodford portrait of his grandfather which now hangs in the Prehistoric Wiltshire Galleries. His important and massive collection of 20,000 fossils and geological specimens was divided between the British Museum and the Society, where some of them are on display in the Environment Gallery today. 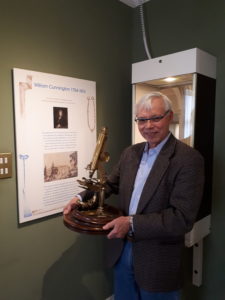 John Cunnington presenting the microscope in 2019

Cunnington lived to see the Society he had founded flourish, outgrowing its temporary premises in the Town Hall and the Savings Bank and moving to its building in Long Street in 1874. During that time, he had been a strong influence as Honorary General Secretary and in 1874 was elected as Vice President and Trustee of the Society. At the fiftieth Annual General Meeting in 1903, his enormous contribution to the Society was celebrated – ‘to him we must all confess ourselves deeply indebted’ and in his obituary in 1906 it was acknowledged that, ‘to the very end of his long life he never ceased to show the liveliest interest in its welfare, both by personal work — and by his many gifts to the Library and the Museum’. As Rev A C Smith said at the Annual General Meeting in 1876, ‘but for his exertions, the Society perhaps never have come into being; it was certainly the case that but for his energy and perseverance a museum in connection with the Society would have never been established in Devizes’.

His microscope, made by James Smith of London, c.1840, was donated to the Museum by William Cunnington III’s great great grandson, John Cunnington, in 2019.

No more work to show

Your ticket for the: Microscope belonging to William Cunnington III