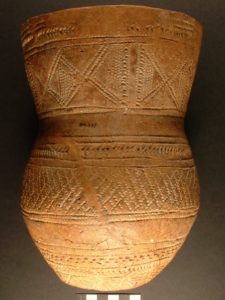 Long-necked Beaker from Durrington G56, close to the Cursus at Stonehenge.

The Wiltshire Museum has worked closely with Alistair Barclay of Wessex Archaeology in the largest study of ancient DNA ever conducted, an international team of scientists has revealed the complex story behind one of the defining periods in European prehistory. The study is published this week in the journal Nature and reported by BBC News.

Between 4,700-4,400 years ago, a new, bell-shaped pottery style spread across western and central Europe. For over a century, archaeologists have tried to establish whether the spread of “Beaker” pottery represented a large-scale migration of people or was simply due to the spread of new ideas. “The pot versus people debate has been one of the most important and long-running questions in archaeology”, says co-senior author Ian Armit, an archaeologist from the University of Bradford in the UK.

Now, a study that reports ancient DNA data from 400 prehistoric skeletons, drawn from sites across Europe, shows that both sides of the debate are right. The paper shows that the Beaker phenomenon spread between Iberia and central Europe without significant movement of people. “DNA from skeletons associated with Beaker burials in Iberia was not close to that in central European skeletons”, says Iñigo Olalde, a geneticist at Harvard Medical School in Boston USA and first author of the study.

“This is the first clear example from ancient DNA that pots do not always go hand-in-hand with people” says genetic David Reich, a co-senior author at Harvard Medical School who is also an Investigator of the Howard Hughes Medical Institute and at the Broad Institute of MIT and Harvard. “The large sample sizes make it possible to paint subtler pictures of ancient human variation than we could before.”

But the Beaker culture spread to other places by migration. Says co-senior author Wolfgang Haak, a geneticist from the Max Planck Institute for the Science of Human History in Jena Germany, “In 2015, we and others showed that around 4,500 years ago there was a minimum 70% replacement of the population of north-central Europe by massive migrations of groups from the eastern European steppe. This new study reveals how the wave rolled west.”

The pattern is clearest in Britain, where the new study reports 155 samples ranging in age from between about 6,000 and 3,000 years ago, a period and place from which there are no published data. Geneticist Ian Barnes at London’s Natural History Museum, also a co-senior author of the study, explains, “We found that the skeletal remains of individuals from Britain who lived shortly after this time have a very different DNA profile to those who came before. At least 90% of the ancestry of Britons was replaced by a group from the continent. Following the Beaker spread, there was a population in Britain that for the first time had ancestry and skin and eye pigmentation similar to Britons today.”
Adds geneticist Carles Lalueza-Fox, a co-senior author at the Institute of Evolutionary Biology in Barcelona Spain, “Beaker culture arrived in Britain just after the last big stones at Stonehenge went up. The fact that the Beaker expansion achieved a near-complete turnover of the population that built these great megalithic monuments dramatizes how disruptive these events must have been.”

The study was made possible by an unprecedented collaboration between most of the major ancient DNA laboratories in the world. Says co-senior author Kristian Kristiansen, an archaeologist at the University of Gothenburg in Sweden, “Different teams had different key samples, and we decided to put together our resources to make possible a study that was more definitive than any of us could have achieved alone.”
The successful analysis of so many samples was also made possible by two recently introduced methods that greatly reduce the cost per sample of ancient DNA analysis. One involves a chemical treatment that allows the researchers to focus their sequencing on the tiny part of the genome that is most useful for analysis. Says co-senior author Ron Pinhasi an anthropologist from the University of Vienna, “another major contributor is the realization that DNA yields from petrous bones are much higher than in any other parts of the skeleton, making it possible to regularly get high quality data from most skeletons we analyze.” Reich concludes, “For the first time we are dealing with sample sizes that are similar to those in genetic studies of present-day people. Such data fundamentally changes the questions we are able to ask about the past.”

This study was conducted by an international team of 144 archaeologists and geneticists from institutions in Europe and the United States.

Your ticket for the: Ground-breaking research on ‘Beaker People’