Wiltshire Museum > See Gold from the Time of Stonehenge

"the Museum pulled everything together ... helped make sense of all the sightseeing..."

Our award-winning displays feature Britain’s greatest treasures from the mysterious golden Age of Stonehenge. This is the largest collection of Early Bronze Age gold ever put on public display in England and our new displays transform public understanding of Stonehenge. We are one of Wiltshire's top-rated attractions on Tripadvisor.

Amongst the ancient Stonehenge era treasures are a beautifully decorated gold lozenge, a magnificent bronze dagger with a gold-covered hilt, a golden fitting from a dagger sheath, a ceremonial axe, gold beads, , necklaces, ear-rings, pendants and other items of gold jewellery, a unique jet disc (used to fasten a luxury garment), rare traces of ancient textiles and two of the finest prehistoric flint arrow head ever found.

“These and other spectacular treasures from the Age of Stonehenge were unearthed by antiquarians and archaeologists in the late 18th and early 19th centuries, but until now it’s never been possible to give the public permanent access to them,” said David Dawson, Director of the Wiltshire Museum. "But now, after generous funding from a number of national and local organisations, we have been able to create a secure and stable environment in which they can be enjoyed by visitors to the Stonehenge and Avebury World Heritage Site from Britain and around the world.

“Stonehenge is an iconic monument – but this is the first time that such a wide range of high status objects from the spectacular burials of the people who used it, has ever been put on permanent display”. The most precious gold, jet and amber objects from the period are being permanently brought together to tell the story of the people who lived in and around the Stonehenge landscape when the monument was one of the great religious focal points of western Europe. Indeed, many of the items may well have been worn by Bronze Age priests and chieftains as they worshipped inside Stonehenge itself,” said Mr Dawson. “Axes and daggers on display in the new purpose-built galleries are identical to images of weapons carved into the giant stones of Stonehenge itself.”

“We believe the new displays are a major step forward in helping to explain the extraordinary sophistication of the remarkable people who used the world’s most famous prehistoric monument”.

The new galleries – featuring gold from the time of Stonehenge – are the first part of a totally new re-presentation of Stonehenge and its landscape, including the new English Heritage Stonehenge Visitor Centre and the new Wessex Archaeology Gallery at Salisbury Museum.

The Wiltshire Museum is just 15 miles from Stonehenge - under 30 minutes by car [SATNAV SN10 1NS]. Devizes is mid-way between two of the world’s most important ancient monuments – the great prehistoric stone circles of Stonehenge and Avebury. Devizes is a bustling market town, set in the midst of the Vale of Pewsey and the North Wessex Downs. There are plenty of excellent pubs, cafes and restaurants, and lots of places to stay. You can also visit the Kennet and Avon Canal and sample the famous Wadworth 6X on a visit to the Wadworth Brewery Visitor Centre.

Presented by Phil Harding, best known for this appearances on Time Team, this video outlines the story of Wiltshire in the Neolithic - the time when people first settled in the County, and first began constructing the famous monuments of Stonehenge and Avebury.

Phil Harding introduces the amazing objects buried with the Bush Barrow Chieftain close to Stonehenge. The Chieftain lived at the height of Stonehenge's power, and his burial is Britain's richest Bronze Age burial. See the amazing gold lozenge and a dagger decorated with gold studs that are the same thickness as a human hair. 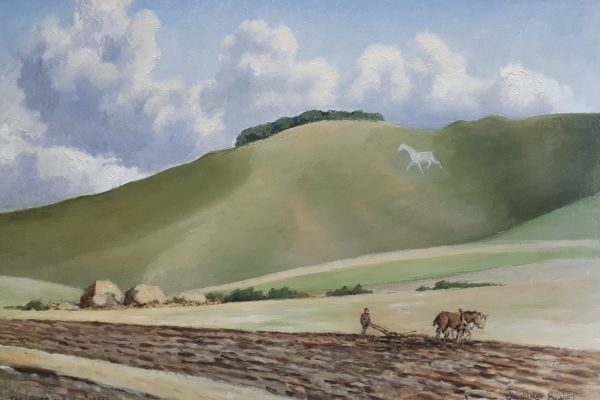 The Wiltshire landscape from chalk hill figures to prehistoric remains - artworks from the Museum’s collection. Echoing…

Wildlife in the Red: Wildflower Meadows

Your ticket for the: See Gold from the Time of Stonehenge