In celebration of Pet Day, our volunteer, Tabby, has searched through our collection to find a variety of  links to our furry friends! From beautiful Roman mosaics, to terrifying fish-shaped water spouts... 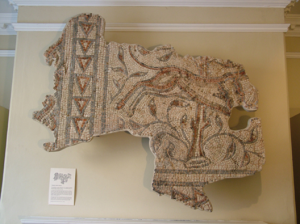 A large mosaic fragment with geometric border and showing a dog running past a tree, from Cherhill, Wiltshire.B ritish exports that the Roman author Strabo mentioned were corn, slaves and hunting dogs. Cherhill Roman villa is close to the parish church and it is possible that a late Roman chapel at the villa eventually became a Saxon church. Cherhill is named after the Saxon word for slave and the area (including Oldbury hillfort) could have been a British enclave preserving Roman ways. 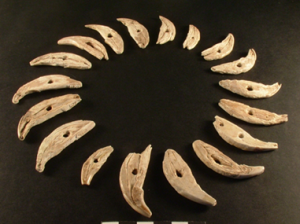 17 wolf (and 1 dog) teeth, these have all been ground flat on each face and bored through the centre. These were found in a primary inhumation in Bronze Age bowl barrow South Newton G1, excavated by William Cunnington. Also found in the excavations was an amber bead. Unfortunately, the barrow had previously been disturbed. It likely once contained various other objects. Never to be found... 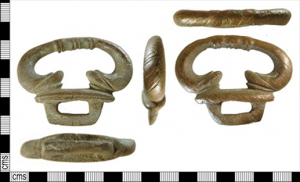 This ring would have been used to to guide the reins of a horse pulling a chariot, found with the use of a metal detector in September 2011. From the Devizes area. From the PAS scheme. 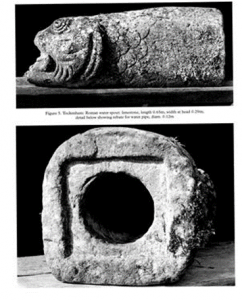 How terrifying are those eyes?!
this roman waterspout is made of limestone. It is in the shape of a fish, with an open mouth, carved scales and rebate for a waterpipe. It was found at Tockenham in 1996, by Phil Harding and Carenza Lewis of Time Team. 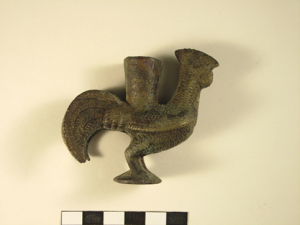 This complete bronze incense burner, in the shape of a cockerel,  is from the Romano-British temple site at Nettleton Shrub, Wiltshire. The site can be found by the side of the old Fosse Way. It was partially excavated by W C Priestly in 1938 and completed by W J Wedlake in 1956-71.

Your ticket for the: Museum Pets