Valentines Day – A look into our collections

This Valentine's Day, volunteer Bethany has discovered some items in our collection related to love. From the very sweet - to the very strange... 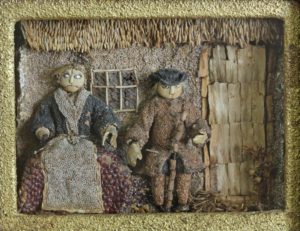 An unusual eighteenth-century folk art picture, composed almost entirely of seeds and probably depicting Darby and Joan. Set within an ebonised shadow box, known as a "Hogarth" picture frame, the scene depicts an old man and woman sitting outside a cottage. They are traditionally believed to be the real life couple, Darby and Joan, as depicted in Henry Woodfall's ballad "The Joys of Love never Forgot", and published in The Gentleman's Magazine in 1735.

How big is that cake?!
Photograph of a 'large' wedding cake, celebrating the marriage of the Duke of York, Calne, Wiltshire, 1893 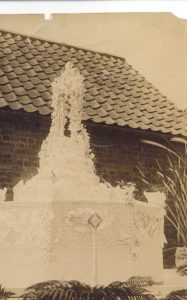 The Duke of York during 1893 was Prince George - the grandson of Queen Victoria and the future George V (after the death of his brother, Prince Albert Victor). He married Mary of Teck on 6th July 1893 in St James' Palace in London. Mary of Teck was originally the fiance of George’s older brother, Albert.

However, after Albert’s death in 1892, Queen Victoria expressed her wish for George and Mary to wed. This was the first royal wedding in 30 years, with the wedding of King George’s father - King Edward VII - being in 1863. Their honeymoon was spent at Sandringham House, the route there was believed to have been met with garlands of roses stretched across the streets.

In Calne, large crowds had gathered in order to celebrate the event. Children were granted the day off of school (one of these schools being Lord Lansdowne's Infant School) due to being a royal and patriotic celebration. A band were in attendance and the celebration provided an excuse for the townspeople to dress in their best clothes!

These brooches were given to the wives and girlfriends of soldiers fighting in the First World War.  This one was found during a house clearance in Devizes. 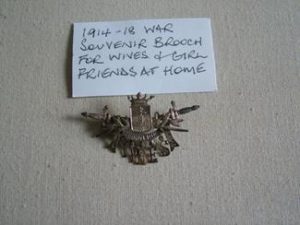 This type of souvenir brooch was known as a sweetheart brooch, as they were often given as a keepsake by members of the armed forces to their loved ones (usually wives and girlfriends, but this was not exclusive) before they left to fight during the First World War. These brooches often portrayed the badges of military regiments, naval units and RAF units - they would often reflect the unit that the loved one was serving in. 1915 was the most common year for Sweetheart brooches, though they were commonly manufactured from across the First World War.

By the start of the First World War, sweetheart brooches were readily available for every regiment within the British Army (alongside units within the Navy and the Royal Air Force) - handmade by goldsmiths and silversmiths and flexible to the budget of the soldier. They were also used as a way to display that a loved one was doing their bit in the war, by being the ones on the front lines.

This brooch is dated from between 1914-1916, which is displayed on a piece towards the bottom of the badge which is carved to look like a ribbon. Suspended from the ribbon are letters which spell out “Ypres”, with this in mind it is thought that the soldier this medal is connected to fought in either the First Battle of Ypres or the Second Battle (or possibly both of these). There were five battles in Ypres that took place during the First World War, which resulted in hundreds of thousands of casualties.

Edward Colston was a Brigadier-General and had served during the 2nd Boer War and the First World War - not to be confused with the Bristol slave trader with the same name. During the Second World War, he was a Zone Commander for the Wiltshire Home Guard - which was the equivalent of a Brigadier or a Colonel in the army. He was born and resided in Roundway House in Devizes, inheriting his title (as the 2nd - and the last - Baron Roundway) from his father Charles Colston. The Colston family did heavily profit from the slave trade and abolition, and used some of the money to purchase Roundway House.

Cigarette boxes became common after the nineteenth century, evolving from leather cigar containers that became popular in the mid-nineteenth century. Silver was one of the most common materials used to make cigarette boxes, these were more likely to feature decorations - such as the owner’s initials. 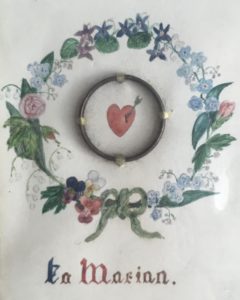 Valentine's Card - The story of a rejected proposal...

Also in our collection are various valentine's card from different points in time.
One, surrounding the Kemm family of Avebury Manor, caught our interest.
Find out more here.

Thank you to Bethany Hocking for researching and compiling this article.

Your ticket for the: Valentines Day – A look into our collections

Valentines Day – A look into our collections